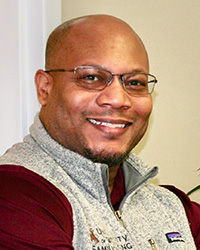 Born in Hartfield, CT to parents who had immigrated from Guyana, Durham spent his early years growing up as an American. When he was six, however, all that changed. Durham’s parents moved the family to Guyana to teach them about their roots and culture. His parents decided to leave young Adrian, his older sister, and his brother with relatives, while they returned to America to prepare household goods for moving.

“It wasn’t easy,” Durham said. He and his siblings were thrown into a completely foreign culture, where the language, although officially English, is actually a kind of a native patois that was barely understandable to Durham’s ears. “For the first three weeks, I could barely understand a word anyone said, but then one day it clicked, and I could speak it like a native.”

School was a challenge culturally because learning was conducted under the British system, but not academically. Durham got along well with his classmates and teachers because everyone found Americans to be intriguing.

Durham said he was always very curious and loved exploring. American kids could leave school grounds without adult supervision and he took advantage of that by exploring almost every mile of the capital city of Georgetown by himself, a little each day. When he later lived in the jungle, he loved exploring his surroundings.

“The culture in Guyana was like being surrounded by a giant family where everyone looked out for everyone’s children, so it wasn’t strange for me to get around on my own,” he said.

When his parents, at last, came to retrieve them, Durham was 11 and found himself once again a cultural outsider. Academically ahead of his American peers, he was placed a year ahead, which made making friends hard until one day he saw a poster recruiting members for the swim team.

“I was always outdoorsy, but never much into athletics,” he said. “I don’t know why swimming struck a chord with me, but it did.” He excelled at his sport and swimming and scuba diving are his favorite activities to this day.

In swimming, he gained experience that would help prepare him for his next life challenge.

“College was a struggle right after high school because we were very poor,” Durham said. “I worked as a lifeguard during college, but I wanted to be a pilot. Flight school was too expensive, of course, so one day I walked in the Air Force recruiter’s office and said, ‘What can you do for me?’” With his academic and athletic accomplishments, the recruiter suggested a special operations program in Pararescue.

Durham describes the training for Pararescuemen, also known as PJs, as wide-ranging and intensive. In addition to extensive training as a paramedic with field surgery skills, he learned everything he needed to perform extreme environment rescue and recovery.

For 15 years, Durham and his special operations team were deployed on rescue missions around the world, but despite the excitement, he wanted something more.

In 2007 he enrolled in Valdosta State University in Georgia while in the Air Force Reserve. While there he earned his undergraduate degree in biology and chemistry and later enrolled at the Edward Via College of Osteopathic Medicine where he earned his doctor of osteopathy degree in 2016.

According to Durham, the difference between an MD and a DO is in the philosophy of care.

MDs practice a traditional or allopathic approach to care while DOs practice osteopathy, which takes a holistic, mind-body-spirit approach to care. In the U.S., the degrees are equivalent and medical licensing boards oversee both types.

Durham completed two out of a three-year residency curriculum in Emergency Medicine at Adena Health System in Ohio and is just completing a two-year residency in family medicine at the University of Wyoming in Cheyenne.

Durham is married and his wife, Charity, is also a doctor who has just embarked on the Family Medicine Residency program in Cheyenne. It means that they will have to live separately for a time, but he is confident that they are up to the challenge. Durham also has five sons, ranging in age from four to 19.

Of his new job in Saratoga, Durham said, “I’ve always wanted to help people from the time I was a kid, and always looked for ways to help. This is an opportunity to put what I’ve learned in the emergency room and what I’ve learned in family medicine to use to help a community.” 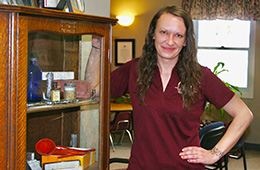